I haven’t blamed Tony Abbott for Holden’s decision to close down its Australian operations in 2016. From all accounts the decision was made offshore and nothing – absolutely nothing – could be done to change the minds of the decision-makers.

But like the Indonesian phone hacking scandal, again something that Tony Abbott was innocent of, his handling of it has been absolutely appalling. Disgraceful yet comedic might be more to the point.

On each of these issues, every time he has opened his mouth he has showered us with contradictions and given every indication that he has absolutely no idea what he was talking about. The signals have been worrying for those among us who worry about the man’s intellect and leadership abilities.

I have put together a few of his recent announcements which reveal his inadequacy to grasp, simply, the ability to make any sense. Let’s start with this one:

Mr Abbott declared he would not provide Holden with any more than the $275 million pledged by the former Labor government in March 2012.

Yet, now that Holden is going he claims that:

We were more than happy to offer continuing generous assistance to Holden.

Yet, with all that money for the industry and despite what’s happened to Holden:

Tony Abbott has declared Toyota won’t get additional money from taxpayers to ensure its survival.

The Internet is awash with instances of Tony Abbott’s contradictions and inconsistencies in his response to Holden’s closure. I’ve only referenced a handful but they are enough to demonstrate the point: he isn’t making any sense. Either he doesn’t know what he’s talking about or he’s forgotten how to lie properly. 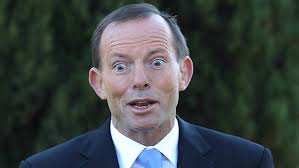 49 comments on “Someone isn’t making any sense”