It has been quite a while since I have posted here at the Cafe, but after seeing the new John Pilger documentary at it’s premier on Thursday night I felt I had to post about it.

The documentary is called “Utopia” and is a sad statement on the way that we treat the first nation people in Australia. There are so many shocking moments (and they were moments that elicited gasps of horror from the audience). In the documentary he questions whether Australia has inherited apartheid from South Africa? And why the rest of the world does not condemn us?

In the documentary, I think it was Jon Altman from the ANU who asks the question (and i am paraphrasing):

Is it time that Australia asked for help from other countries to solve the problem that the indigenous population face, because we cannot seem to solve it ourselves?

Some of the interviews with politicians show how they really do not understand the pain that they are causing. Mal Brough and particularly Warren Snowden come accross very badly. A plague on both their houses.

I urge you to watch the documentary when it comes out.

Just wanting to lighten the mood on a Sunday night – but does anyone else wonder why Kevin Rudd has put on a fake beard and moustache to do ads for KFC? 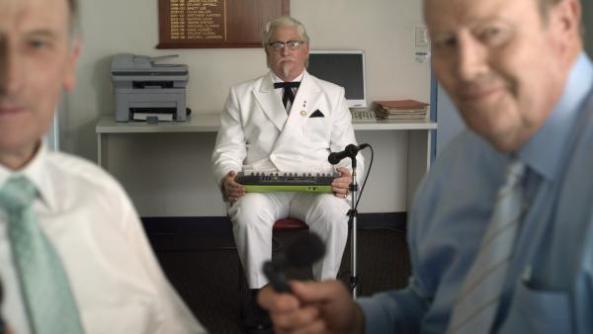 Now that the details of the Flood Levy have been officially released, the coalition is on the war path. What did Tony Abbott say?

“As soon as the Government puts on a tax, it is not an expression of generosity.”

Of course the first words out of Abbott’s mouth was that it was a TAX!!!

But wait a minute, hold the horses… what did Joe Hockey tell me when I posed the following question to him on Qanda back in May?

JON HARRIS: Over here. The Opposition will impose a levy on business to fund a paid parental leave. When does a levy become a tax?

JOE HOCKEY: When it becomes permanent.

TONY JONES: So when you propose it it’s not a tax, it’s a levy, but when…

JOE HOCKEY: Well, can I tell you I think…

JOE HOCKEY: Look there are a vast number of levies. There have been gun buyback levies, sugar levies, Ansett levy. Remember that levy that was in place for a lot of travellers, and you would hope and expect and we have a history of it, that when you get the budget to surplus you get rid of levies. That’s what we do. We did that. We had the gun buyback levy. We had the Ansett levy and we got rid of them. We got rid of them once they had raised the funds necessary.

I trust that Mr Hockey will be correcting his leader. I wont be holding my breath.

Finally I have read an article on the Wikileaks affair that puts it all into context for me. The great Umberto Eco writes:

The WikiLeaks affair has twofold value. On the one hand, it turns out to be a bogus scandal, a scandal that only appears to be a scandal against the backdrop of the hypocrisy governing relations between the state, the citizenry and the press.

The top-secret dope on Berlusconi that the US embassy in Rome beamed to the Department of State was the same story that had come out in Newsweek the week before.

Read the full post by Emberto Eco (and for those who might read Dan Brown’s atrocious novels, try Eco’s versions – far far better) for what he predicts will happen.

But he hits the nail on the head in the article, nothing in the cables leaked so far is groundbreaking, just a confirmation that the spies spread gossip. Nothing more. And that is what (IMHO) is pissing off the establishment, the empire has no clothes.

There is a big decision to be handed down in the High Court today. As David Marr writes in this mornings SMH:

It’s big. Few decisions of the court have been so anxiously and eagerly awaited. All will be clear this morning, but when lawyers gathered in August to argue the case in Canberra, judges on the bench indicated they were ready to make a big call: that boat people cannot be detained and processed outside the law.

Had the two Tamils known as M61 and M69 flown to Australia on a tourist visa and then asked for refugee protection, they would have been released into the community and assessed by the Refugee Review Tribunal with the courts keeping an eye on officials to make sure all was properly done.

I hope the High Court overturns the excision system.

Update: The High Court has ruled that the offshore processing is invalid:

Who’d a thunk it? The Daily Telegraph publishing an article that details how we are not being swamped by boat arrivals. Simon Benson writes:

The fact is that the number of boat arrivals in the past year numbered 5237, which is 3.15 per cent of the total immigration program of 168,623. If you take it as a percentage of the 2009 net overseas migration figures or population growth which was 320,400, the percentage is down under 1 per cent.

But the politics of fear that has been allowed to fester in the community has swamped the judgment of those whose responsibility it is to lead by example and principle, and not by misguided populism. Populism should be reserved for bashing banks and a bit more humanity put back into the debate about asylum seekers.

Well said that man. How did this get past the editors at the DT?

Another in the “I sit here and shake my head” file.

The head of the Catholic Church in Belgium has said that AIDS is “intrinsic justice” for homosexuality.

It get’s better – he also thinks that priests who abuse children (but are no longer working) should not be punished.

Priests who abused children in their care must be made aware of what they did but if they’re no longer working, if they have no responsibilities, I’m not sure that exercising a sort of vengeance that will have no concrete result is humane.

I reckon that Combet has hit the nail on the head. The reason for the thumping that the ALP received at the election was because they abandoned their core policy on the ETS. Writing in todays SMH he says:

Nevertheless, we must acknowledge that Labor lost votes to the Left at the federal election. It is clear that some of this vote switching was caused by the deferral of the ETS.

Exactly – which is why the Greens vote went up.

The ALP must come through with some type of carbon plan in this term, or they will lose more votes to the Greens (which I’d actually prefer).

Helen Coonan has a piece in the SMH today where she puts forward the excellent proposal that we should have a high speed train network up the east coast, and that this is the type of infrastructure that is badly needed in Australia.

Sydney, Melbourne and Brisbane would already have high-speed rail connections if Canberra policymakers spent as much time on trains as they do in the air.

Crucially, Australia’s increasing population requires urgent commitment to develop transport alternatives for our future sustainability. The unfortunately high number of deaths on the last long weekend demands a better transport alternative that is not only safer for those travelling long distances but also better for the environment.

Reducing our dependency on roads and petrol, while alleviating traffic jams, is just one reason why the government has to make high-speed rail a priority. If China, Spain and the US can transport people using high-speed trains, so should we.

But, of course, the obvious question is: why did you not do it when you were in power for those 11 years? Why did the government that you were part of squander the opportunity to build high-speed trains?

Oh that’s right, a deficit is bad… investing money (like the NBN) is bad for the country. Surpluses (more revenue than you spend) are good. Silly me.

I was getting a coffee this morning and (unfortunately) glanced at the Daily Telegraph. Scanning through the first half of the paper and there were no stories on federal politics – it seems like Limited News has decided to not even make up bad stories about the government, and they are just ignoring the internal fight within the Liberal party. Thank deities for Fairfax, cause they have the story on the Hockey/Abbott stoush.

SENIOR Liberals have warned that Tony Abbott must put an end to the white-anting of Joe Hockey after the head of the ANZ Bank upbraided the shadow treasurer as a bank-bashing populist who was eroding the Coalition’s economic credibility.

This sort of in-fighting will only damage the Liberals. Can you imagine the hyperbole that Limited News would publish if it was in-fighting in the ALP?

But seriously – is there nothing in federal politics that needs to be detailed in Limited News newspapers?