Fiona Katauskas in today’s New Matilda in the interests of balance with a certain ABC comedy, to which I will not provide a link, has given us a great cartoon. 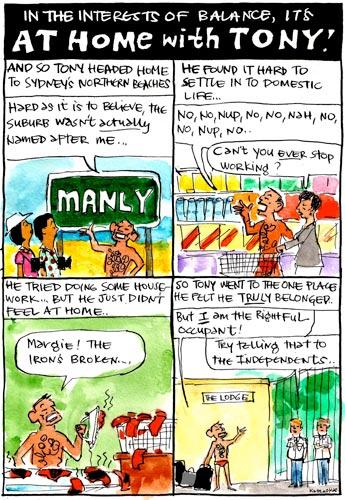 But like many other cartoonists, reporters and commentators she has overlooked a very important fact.  It’s not the Lodge he has his sights set on.  It’s Kirribilli House, in Sydney!   I can’t draw cartoons,  but here’s my take on some script ideas!

Like most of the media she’s got it wrong,
But some of us have known it all along.
Tony Abbott as PM will dodge
The inconvenience of The Lodge.
Like John Howard, he’s not silly,
Where he plans to live is Kirribilli!

He needs sea to prove he walks on water.
And those shots of his daily cleans and jerks,,
Don’t reveal all of his body works.
Some things are best kept in obscurity
Beyond range of Canberra “security.”

It’s rumoured he has a secret life
Behind the facade of three kids and a wife.
He needs to take care or he’ll be a goner,
Seen once too often with that ‘Belladonna.’
Whoever of these is his ‘lovely lady’
He should drop her. She’s poison. Deadly. Shady.

Then he should do that show, “At Home With Tony”
Just for PR, no matter how phony.
Show off his house and he’d have it made.
He can mention his mortgage he’s gotta get paid.
“Money’s tight, sure don’t grow on trees!”
Yeah, he’s just like us. So vote for him, please!

A Cardinal, who can save him from hell,
Forgive him this sin, grant him remission,
With the others to come, at daily confession.
That’s another reason Tony’s ambition is
For the PM’s residence to be………. in Sydney’s Catholic Archdiocese.