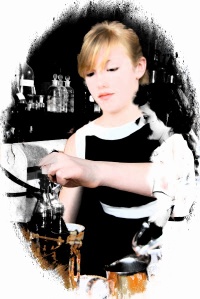 Australians ranks amongst the hardest working in the first world, ranking fourth for long hours worked among 34 OECD nations.

Turkey ranked No. 1, with almost half its population working more than 50 hours a week. Mexico and Israel followed. The Netherlands, Sweden, Denmark and Russia had the best work-life balance with only 1 or 2 per cent of employees working very long hours.

And that’s just the blokes, with one in 5 men working more than 50 hours per week.  At least Aussie sheilas are doing it better; or at least better than Turkey or Mexico . . . or are we?

TAKE a bow, ladies – Australian women are among the world’s hardest-working on the home front.

A report has found that of females in 29 countries, Australians rank fifth in the number of hours each day spent doing unpaid work.

Although this article from the Herald Sun treats the issue somewhat flippantly, unpaid work does mean one hell of a lot more than running the vac’ around the lounge room, it’s the carers, the volunteers without whom organisations could not exist . . . you know who you are.

It will come as no surprise to anyone that “WORK is killing off the great Australian weekend and starving kids of family time.”.  Below of course pertains not just to the traditional family, mum, dad and kids but to all working people who are socially deprived due to the impossibility of anything resembling a life/work balance.

Australians are now three times more likely to work weekends than they were 20 years ago – one in three workers now spends Saturday or Sunday on the job.

New research exposes the true cost of weekend work, as it steals leisure time with friends and family all week long.

When fathers work weekends, mothers get less quality leisure time with their children as they catch up on chores.

But when women work Saturdays, the blokes spend more time with their mates.

Weekend work has nearly trebled over the past 20 years, from 12 per cent of workers in 1993 to 33 per cent today, Australian Bureau of Statistics data shows.

Half of all business owners, 42 per cent of contractors and 30 per cent of employees now spend their weekends in the workplace, rather than the backyard or beach.

And one in four workers is on call or on standby, as technology contaminates leisure time with messages and emails from the boss.

The Social Policy Research Centre at the University of NSW has calculated the “knock-on” impact of weekend work on leisure time, by analysing ABS data sourced from time-use diaries filled in by more than 4000 workers.

When men work weekends, the researchers found, “this comes at the cost of mother-child leisure time”.

“More people are working shifts because lots of jobs are becoming 24/7, like retail,” she said yesterday.

“And workers are having their weekends encroached upon more and more by technology, so it seems harder to have a boundary between work and home.

“It’s not good for family bonding, to not have parents available to their kids when their kids are available.”

The research shows both parents spend less quality time with their kids if either mum or dad works weekends.

The above article is from new.com, and published in August last year.

This is the reality of working Australia.  Also to be kept in mind is that according to the ABS, “One quarter of all employees earned $588.00 or less“.

Eric Abetz:  “We risk seeing something akin to the wages explosion of the pre-accord era when unsustainable wage growth simply pushed thousands of Australians out of work.”

Steven Walters, a chief economist with JP Morgan, says “. . .wages growth is the lowest it has ever been.”

Prime Minister Tony Abbott is under pressure from his backbench to address ”job-killing” weekend and holiday penalty rates, with 10 Coalition MPs telling Fairfax Media the controversial issue cannot be ignored.

Does this make any sort of sense?  Since the Murdoch media installed Tony Abbott as Prime Minister, Abbott’s Mr. No persona has been reinvented as Mr. Slash and Burn with thousands of jobs thrown in the dust bin in pursuit of Abbott’s ideologies. Who exactly is the job-killer Tony?

Yet according to Abbott and Abetz it’s the kids, the women trying to support themselves and their families . . .and who are prepared to work weekends and holidays, and while knowing that they must sacrifice valuable family time in order to achieve this; it’s they who are in the “job-killing” business.

Yes you have it, according to the Liberals, Australians who work some of the longest hours of all OECD countries, and with the worst life/work balance, especially pertaining to women who seem to have ZERO time to do anything else except work . . . paid and unpaid; these same hard-working Aussies according to Abbott and Abetz are “in the job-killing business”.  Clearly the solution is to pay them less.

In August 2012, former Prime Minister John Howard called for a return to individual employment contracts, however then Leader of the Opposition Tony Abbott was quick to end speculation saying, “there will be no going back to the past”.

But Mr Abbott said the Coalition would not seek to be ideological in the industrial relations arena.

But perhaps, and in order to find out what Tony Abbott’s honest answer is, then we need to go back to Abbott in Opposition:

The federal government is finalising plans for a sweeping review of the nation’s workplace laws, and could hand-pick an industrial relations expert from outside the Productivity Commission to help lead it.

Before the election, the government promised a ”genuine and independent review” of the Fair Work laws by the economically dry commission, to consider their impact on productivity, the economy and jobs, with a view to raising flexibility in the workplace.

The review comes as Employment Minister Eric Abetz revealed plans to introduce new laws next week that would allow workers to trade off conditions such as penalty rates in return for more flexible hours.

So what happened to the “review”?  Preempting any “sweeping review” by either the Productivity Commission or Abetz’ and Abbott’s “hand-picked” expert, Abetz and Abbott have announced that Australian workers are going to be permitted to trade away their penalty rates in exchange for . . . whose flexibility?

Senator Abetz confirmed, when asked about the changes, that they would allow workers to trade off penalty rates for family time.

He stressed it would be employees who decided if this trade-off suited them, and not employers dictating that penalty rates be signed away.

I wonder in what reality Senator Abetz lives?  An imaginary place where the lass at the checkout or the young bloke on the factory floor has the ability to say to the big boss, “No sorry, I would rather get paid overtime rather than leave work at lunchtime.”.  “Don’t come in Monday, we don’t need you until later in the week” is already the reality for many of Australia’s workforce, but it is now obvious that in the guise of Abbott being “the best friend the Australian worker ever had” . . . look, think of it this way, you may not be able to pay the bills or put food on the table, but at least you’ll be getting quality time with the family . . . that this is the first step of an ongoing campaign.

From ACTU president Ged Kearney:  ”This is a blatant attempt to cut pay and conditions … despite all the pre-election promises,” she said. ”Minister Abetz talks about imaginary workers that want to give up penalty rates for nothing. We’re yet to find a worker that thinks this is a good deal.” 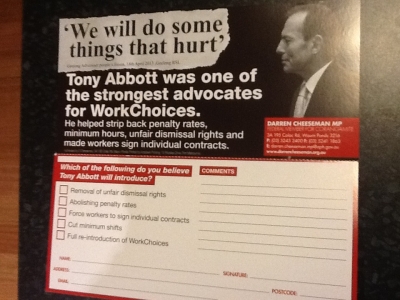 As a follow up to Truth Seeker’s popular Tony Abbott’s letter to Santa he has penned a similar letter, but this time from the person whose job Tony Abbott craves for. That of the Prime Minister of Australia. Like his previous effort, Truth Seeker provides a few laughs in this piece too. And after the week just gone, don’t we need them!

While Abbott’s spent his entire year

On lies and spin and personal smear

But his arrogance has turned to fear

As he took the things that he held dear

Like his lead In the polls and his misplaced cheer

To win, the man will gladly cheat

With his motley crew joining his deceit

As they open their mouths, to just change feet

While the MSM apply the heat

With opinion sold as facts, complete

With lies and spin, a right wing treat

Our democracy, their aim to beat

But instead turning victory . . . to defeat

So the things I ask are not for me

But for the lying bastards in the LNP

A conscience would set the Abbot free

From his inherent lack of honesty

Cos he talks like he is off his tree

With veiled abuse, based on misogyny

Combined with no integrity

And Julie Bishop, needs your help for sure

As a legal whelp, and a multi nationals hoar

She proved she’s rotten to the core

With her morals discarded, on the floor

By putting profits over compo, for the poor

Known best for her meow and her pussy claw

And her shonky knowledge of the law

From parliament she should be shown . . . the door

Then there’s sloppy Joe, who hasn’t got a clue

About what’s good, or right or true

And he’s flushed his credibility down the loo

Making out his maths are real true blue

Even though the man can’t count past two

And the mincing poodle, Chrissy Pyne

Makes out as if he’s doing fine

When all he does is cross the line

And the lies and spin, on which he likes to dine

Even if he’s wearing Calvin Kline

And Malcolm Turnbull, is no gent

Cos Godwin Grech proved the man’s quite bent

Leaving his reputation with a hell of a dent

And his credibility, all but spent

With his only option, his spleen to vent

Over a portfolio that’s less than Heaven sent

And an NBN plan that’s quite low rent

He needs your help . . . to voice his real intent

Eric Abetz, is a legal knob

Who dribbles liable from his gob

Because he thinks that that’s his job

With reputations, his to rob

By the slander grenades, he likes to lob

On behalf of his lying Liberal mob

And Sophie Mirrabella, the queen of sleaze

Should leave the ranks of the parliament, please

With her tail between her knobbly knees

For her lack of morals and complete brain freeze

Is another one they should dump with ease

And her brain has atrophied . . . in large degrees

The media need your help as well

To move away from the corruption smell

Cos with Jones and Bolt they’ve gone to hell

Where if they don’t change soon, they’ll forever dwell

So stop them ringing his right wing bell

Cos they find the truth so hard to tell

So dear Santa, what I’ve asked is hard

But we know they’ve all been fatally tarred

With the rabid right’s polluted lard

And our democracy is badly scarred

By these spoilt brats, from the private school yard

Whose lies and spin should just be barred

When they play the joker, as their only card

With his long forked tongue and his cloven hoof

That his cred took a nose dive off the roof

The one thing I’d ask for me for soothe