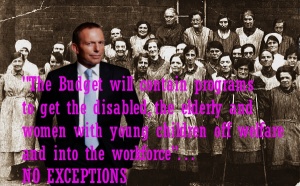 The Abbott government has been working incessantly to work up to the Mother of All Scare Campaigns.  There is an emergency!  There is a crisis!  About what, the government has been careful to avoid backing up with anything factual.  Economists both left and right leaning have said not one single word in support.  We do know that there is debt, writ large with a capital D and that somehow pensioners and disabled people are the cause of it. . . or at least both Hockey and Abbott sticking to their chosen theme would have us believe so.

This brought to mind one of John Howard’s favourite techniques, this being to prime up his audience usually via the media so as to create ‘a situation’.  Newspapers, shock jocks et al would dutifully comply running numerous *shocking stories* complete with photos taken by willing neighbors/rellies and other assorted accomplices of, for example:  long haired ‘louts’ who refused thousand-dollar-a-week jobs on sublime tropical islands due to the fact that they preferred to loll about on the dole in some mall in an unnamed western suburb, or a ‘pretend’ disabled person caught by his worthy neighbor *gasp* on his roof.  Clearly people with disabilities cannot be disabled if they can find themselves on a roof.

And it worked very well.  Following a few weeks of such stories, which by some miracle would appear simultaneously in all major newspapers; to the rescue – our fearless then PM, little Johnny promising to ‘come down hard on’ such rorters.  A thankful public sighed with relief that we had such an alert PM who knew how to ‘take action’.

John Howard, did however accomplish this with at least a modest amount of subtlety, a trait which Tony Abbott and his team are the antithesis of.

Tony Abbott in an attempt to emulate his hero Howard makes a mockery of all things Liberal.  The ham-fistedness and inept handling of this government’s attempt to reshape Australia in a regression to some unknown ultra-conservative stance way beyond anything which Howard would even contemplate, nor want, is an embarrassment to all.

Abbott therefore commits falsehoods, but one must consider that he does either with such ego that ‘it doesn’t count’, or with an ignorance which cannot be excused away as ‘new to the office of Prime Minister’.

TONY ABBOTT has told voters not to believe everything he says.

In an extraordinary admission last night, the Opposition Leader said his only utterances that should be regarded as ”gospel truth” were carefully prepared and scripted remarks such as those made during speeches or policy pronouncements.

However, it would seem that we are not to believe even the carefully prepared and scripted ones.

To date the government has encouraged speculation on (and the list is not exhaustive), that the family home of pensioners will be sold from under them if they expect to collect the pension; that pensioners are a drain on the economy and society, (while completely ignoring the contribution that people in their 70’s, 80’s and beyond have made to Australian society); that pensioners and people with disabilities should be ‘encouraged’ back into the workforce (which jobs and how? remains an unknown); that ‘everyone’ will have to pay $6.00 to visit the doctors (while dismantling the super clinics).

And now comes the penultimate of lies, that the Deficit Levy is not a tax.  That is, families on $80,000 will be losing out by $800.00pa, more than the average of one month’s mortgage payment while at the same time giving millionaire mummies a ‘gift’ of $75,000 for 6 months of bonding time with bubs.  Is something not quite jelling here?

John Howard knew not to frighten the horses.  The Tony Abbott/Credlin duo do not have that sort of finesse, intelligence nor acumen.