The big bold headline you are now met with is . . .

Rather presumptuous, don’t you think?

The Australian Government will abolish the carbon tax from 1 July 2014. This will lower costs for Australian businesses and ease cost of living pressures for households.

Not only presumptuous, but now a bit of bullshit has been added for good measure. Here’s more of the bullshit:

Why are we removing the carbon tax

Repealing the carbon tax and the Clean Energy Package is designed to:

Rather odd, isn’t it?

I could have swore that on their site I read somewhere the claim that ‘We contribute to developing climate change solutions, reducing greenhouse gas emissions, and adapting to the impacts of climate change‘. 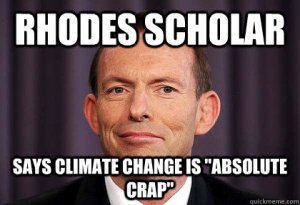 13 comments on “The ‘new look’ Dept of Climate Change”