The results from yesterday’s Nielsen Poll gives Labor a 52-48 lead over the Coalition and an approval rating for the Opposition leader, Bill Shorten a modest 21%. I say ‘modest’, yet it is the strongest debut of any opposition leader since Kevin Rudd in 2006-07.

The poll should not bring much joy for the Government as voters have also voiced rejection for the Government’s policies with, in particular, their handling of asylum seekers and their Direct Action plan proving overwhelmingly unpopular.

In all seriousness though, this is an absolutely disastrous result for the Prime Minister. While the Government has only taken a hit, he has taken a bashing. He is clearly unpopular beyond imagination and has earned not an ounce of credibility since taking office. Mark Kenny, in the above article offers a few suggestions as to why:

Can you think of any more? For example, do you think his tough stance on Indonesia has blown up in his face?

Tony Abbott has clearly taken the blame for the Government’s failings, and so he should. The buck stops with him, to borrow an old term.

But fear not, within days a Newspoll will be released showing he has an approval rating of 90% and the Government leading the Opposition 55-45. 😉 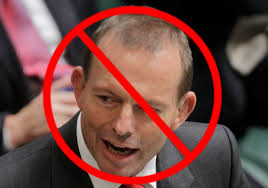 87 comments on “Mister One Per Cent”