I clicked on a link to this Sydney Morning Herald article, George Brandis to repeal ‘Bolt laws’ on racial discrimination by Jessica Wright, who we are told, is a “breaking news reporter for The Age”. Here is an extract from the article:

Prime Minister Tony Abbott and Attorney-General George Brandis will fulfil an election promise next week and introduce legislation to repeal a section of Racial Discrimination Act that conservative journalist Andrew Bolt was found guilty of breaching.

The repeal of the laws that make it unlawful to offend and insult people because of their race will be the first legislation Senator Brandis will introduce to Parliament, according to The Australian newspaper.

Senator Brandis told The Australian that he was certain that the changes to the act would be viewed as the government condoning racist behaviour, but said he believed ”you cannot have a situation in a liberal democracy in which the expression of an opinion is rendered unlawful because somebody else … finds it offensive or insulting”.

Did you see what I saw? In case you missed it, here it is: “according to The Australian newspaper” and “Senator Brandis told The Australian“.

I’m sure that Jessica Wright is a good journalist who has no doubt produced some outstanding articles. I’m also sure she’s not the first journalist to source her story from another journalist, but you must wonder if this is the best our political journalists can do.

We saw this far too often in the lead up to the 2013 election, with the ABC being the biggest culprit. Obviously they aren’t alone.

So if you’ve ever wondered where journalists source their news, now you know: from each other.

The article, in the Sydney Morning Herald, by a breaking news reporter from its sister paper The Age, was based on an what had been said by a journalist in Murdoch’s The Australian. 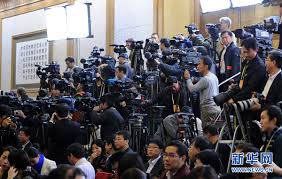 18 comments on “Have you ever wondered where journalists source their news?”