Tony Abbott ended his message with another squirmworthy and excruciating moment for his long suffering daughters, who look horrified as he finishes his pitch by talking up their good looks.

Says it all, really.

Here’s the link to the video. News.com.au were right: squirmworthy. 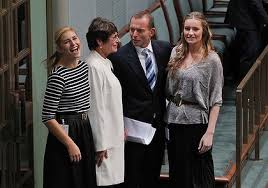