Sometimes when Joe Hockey opens his mouth the most stupidest things spill out. Such was the case when he complained yesterday that the Opposition was drowned out by celebrity’ Kev. For your amusement here is the complaint filled article in full:

Shadow treasurer Joe Hockey has complained that coalition policy announcements have been drowned out by “celebrity” Kevin Rudd.

Mr Hockey again referred to the prime minister as “Kevin Kardashian” and said sooner or later people would see through him.

He insisted the coalition had big plans for Australia and its pitch was far broader than just abolishing the carbon tax and stopping the boats.

“We’ve been making announcements every day for our plans for Australia’s future, but they’ve been drowned out by the celebrity Kevin Rudd,” he told the Ten Network Bolt Report program.

Mr Hockey said Mr Rudd was all smoke and mirrors.

He said Australia could end up paying social security and Medicare benefits to asylum seekers for the rest of their lives under the PNG solution.

The carbon price was also set to rise to $38 a tonne under Mr Rudd’s move to an emissions trading scheme, he said.

But climate change minister Mark Butler said it was Opposition Leader Tony Abbott who predicted Australians would have to pay $100 for a roast dinner and that some towns would be wiped off the map under the carbon tax.

“The time has come for the opposition to get off the political posturing,” he told Sky News.

Oh, the irony. Does this bloke expect us to take him seriously?

He’s good for a laugh, nothing else. 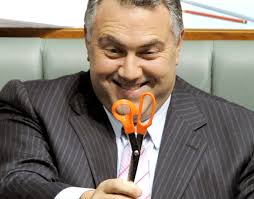