This is a comment made this morning by a well-known Australian writer:

Anzac Day. A celebration of a society so fucked up it saw no other option than to go to war. Kill, rape and invade. Then glorify it.

I’ve been hearing such sentiments more and more each ANZAC Day. Personally, it makes me feel sick. It’s what I don’t like about ANZAC Day: the moaning of the ungrateful Aussies.

I wonder if the writer grew up in a family that went to war.

My father spend 20 months in New Guinea fighting off the invaders in WW2. You’d hardly know he served, so little did he speak of it. He certainly didn’t glorify it. I lived in a soldier settlement area on Kangaroo Island so all the ‘old blokes’ I knew had served in the war. Not once did I hear the war mentioned. Not even the glorification of their conquests, even the sexual ones. The above writer may find that difficult to believe. It’s fairly hard to spend your days raping local women while dodging the bullets of Japanese snipers.

But the war never ended for these guys. They carried emotional scars to the grave.

Anyway, like I said, I feel a bit sick in the stomach. How does it make you feel? 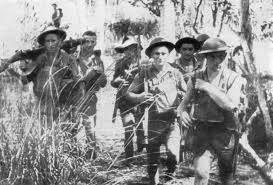 51 comments on “What I don’t like about ANZAC Day”