Between now and the election you will not be able to read a newspaper without trembling in your boots at the mayhem and destruction the Gillard Government has hoisted upon us. Up to now, the media has been coming up with some stories that quite literally cross the bounds of not only credibility, but reality. But just how bad is it going to get? Here are some stories that my crystal ball predicts will gain ferocious prominence in the following months.

A mad scientist, who incidentally received funding from the Gillard Government, genetically manipulated some koalas turning them into fierce drop-bears which lust after the taste of human blood. Whole towns – unnamed of course – have been attacked by packs of these vicious little creatures. People are urged to stay well clear of trees. Tony Abbott dumps his dubious plan to re-green Australia by planting a million trees and urges industry to clear as much land as possible. “The habitats of the drop bears need to be destroyed if we are to eliminate another failure of Julia Gillard”. If only the government hadn’t have funded science in the first place.

Over 5,000 Whyalla residents are hospitalised after an outbreak of cholera. This is linked to the mining tax. Tony Abbott says he was misunderstood when he said that Whyalla will be destroyed on July 1, 2012. “What I meant to say, was the destruction of Whyalla would be slow and painful after the introduction of the mining tax and that outbreaks of deadly diseases would be imminent”. He adds, “Those dying Australians, whilst not all of pure heart, can thank Julia Gillard for their demise with their dying breaths”. It is understood that he sent a private email to his friend Lott, urging him to flee the city with his wife and children. They are not to look back, he warns.

The average price of Australian houses is expected to fall by as much as 80%, an unnamed economist has warned. Joe Hockey says this confirms the uncertainty created by the Gillard Government because interest rates have not been fluctuating wildly. “If interest rates were jumping up and down we would not be witnessing the huge number of layoffs of Sydney bus drivers. This proves that the Labor government should have built more dams. As Treasurer I will ensure that interest rates keep climbing. The Australians struggling to pay off their mortgage need some certainty in their lives, and I will deliver this. The Gillard Government cannot be trusted to guarantee enough milk production in remote areas”.

Eighty-two million refugee boats are seen heading to Christmas Island. Tony Abbott holds a press conference to reveal that internal Liberal polling has identified that each boat contains on average four terrorists, five pedophiles, nine people who have relatives that were let into Australia by Julia Gillard personally, and one passport. He also announces – before fleeing the scene – the Coalition’s plan to resettle these people in areas known to be inhabited by large numbers of drop-bears.

The record temperatures recorded over Summer are confirmation that global warming is not happening. “This is God’s work” says Tony Abbott. “God wants more people to go to the beach because this will help the ailing public transport system in Western Sydney. Julia Gillard does not want people in Western Sydney to have access to God’s beaches”. He promises – before fleeing the scene  – that His government would build 19 transport corridors leading from Western Sydney to Bondi. “Make that 20” he shouts while escaping from the building.

A faint voice is heard in the distance: “Make that 21”.

Laurie Oakes receives an email that reads: “Make that 22” and publishes an exclusive story in The Australian that an Abbott Government will construct 35 transport corridors from Western Sydney to Bondi and five from Western Sydney to the Gold Coast. He also reveals that a friend of his second cousin’s eye specialist was told by a friend of a Labor front-bencher’s hairdresser that Julia Gillard plans to dump 400 million tonnes of sand around Western Sydney to give it that “seaside feel”.

A seagull is found dead on a Perth beach. Tony Abbott promises a full investigation and again accuses the Gillard Government of funding mad scientists. “This was clearly the work of an evil mind and has the Government’s dirty finger prints all over it. This seagull would be alive today if it wasn’t for Julia Gillard”. An autopsy reveals that the probable cause of death was old age. The Daily Telegraph publishes those findings on page 19.

Julia Gillard holds a press conference without wearing her glasses. Alan Jones is livid. Andrew Bolt convinces his readers that this is ‘typical of those pathetic lefties’ while Piers Akerman sees this as something Satanic.

The Herald Sun speaks to 45 women who have left ‘things’ in Tony Abbott’s fridge, providing further proof that he loves woman. Because Julia Gillard’s partner is a man, she is accused of not loving women. When she says that she does love some women she is accused of being a lesbian. Tony Abbott announces that further internal Liberal polling reveals that of the eighty-two million refugee boats heading our way, 12% of the captains have a sister who is a lesbian. Alan Jones is livid. Andrew Bolt convinces his readers that this is ‘typical of those pathetic lefties’ while Piers Akerman sees this as something Satanic.

Coming soon to a newspaper near you! 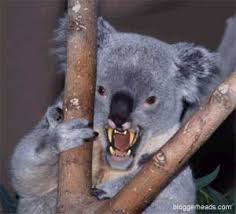 152 comments on “Let the scaring begin”