Due to one reason or another I haven’t been able to post another of truth Seeker’s great poems, but with the political lull over the last 24 hours I at last grab the opportunity. I hope you enjoy his latest: Relevance Deprivation Syndrome (the scourge of the mega rich and power hungry).

For the mega rich or power hungry

Or those that aspire to be

that’s a painful and sad malady

It consumes their thinking and perverts their souls

And drives them all to distraction

As they spruik their opinions and ideologies

But unfortunately fail to gain any traction.

There’s the likes of the old Graham Richardson

Who deserted the ALP fold

To join the murky ranks of the media

And to them his soul was sold

On an ex-power broker ticket

But the truth is his opinions are irrelevant

As most people tell him to stick it.

The LNP in its entirety

Pushing its lies, spin and slogans

Join the ranks of irrelevancy

Being populated by wealthy bogans

They jostle around for the headlines

Claiming victory with each little gem

While the government gets on with the job to be done

Proving government works better . . . without them.

Acts as  though he’s Abbott’s  pet

He just hasn’t realised it yet

And then there is Sophie Mirabella

A person that just isn’t nice

With a heart pumping nought but dry ice.

And the opposition’s main aim is

As the suspension of standing orders

Is the only game that they play

And they don’t seem to know what portfolios

They are actually to represent

As they never ask questions related

Proving they are totally . . . irrelevant.

Jones and Hadley and Bolt

One is an idiot, one is a moron

And one is a rambling dolt

They each have a liberal audience

But for relevance none of them get passes

For they all deny truth fact and reason

Instead speaking straight from their arses.

The MSM and the ABC

All pushing their own agendas

Prove to the public their irrelevancy

As they’re seen to be right wing truth benders

With Liberals and moguls asleep at the helm

And steering them straight for the rocks

And the people who desire the truth from their news

Think that most of their journalists are cocks.

With their headlines of smear and innuendo

Tainting banners all over the land

As the editors and the producers

While their business model is failing

As that dreaded NBN looms large

And the world passes by in its speedboat

While they watch from their . . . sinking barge.

Clive Palmer is a classic example

Calling pressers with nothing to say

Then changing his mind the next day

Then to announce a new project

Rich he may be but irrelevancy

Is the name of the game for this manic.

And a T Rex his latest acquisition

To complement an old car collection

He’s got planned for his resort on the sunny coast

With Jurassic Park his planning direction

And his money he’s happy to squander

In his efforts to get himself heard

But the sad thing for sure he’s the real dinosaur

Our Gina’s the top of the heap

Buying shares in the press, just created a mess

As the mountain ahead proved too steep

For the biggest of all, with the furthest to fall

She’s now stuck with the shares she can’t sell

Proving wealth’s not enough to disguise all the slough

Or to cover the intrinsic bad smell.

And according to Gina socialising and drinking

Are for those from the wealthiest patch

Living life and having fun, by the poor shouldn’t be done

And an itch only the wealthy can scratch

But to be rich don’t be jealous, work harder

While cutting the minimum wage

Which might work if we could eat from her larder

And live to Methuselah’s age.

With the platinum spoon hanging out of her mouth

And  irrelevancy her biggest call

And her children unhappy with her attitude crappy

And her eyes fixed on the wrong ball

She craves to be relevant ignoring the elephant

In the room that’s just dumped a big turd

For the elephant you see and her irrelevancy

So take note all you pollies and moguls

You shock jocks and journos alike

As the public don’t like to be lied to

And they’ll tell you to get on your bike

Credibility and respect are both earned

As with class, you cannot take classes

So be honest and decent and the people might listen

But you need to stop . . . talking through your arses. 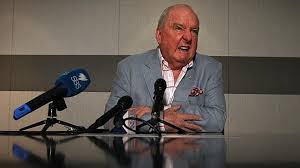