With both the festive season and penciled-in engagement dates creeping up very fast, the opportunity to write new posts is a bit restricted. A few are in draft mode, and of course if anything exciting were to happen on the political front over Christmas then I’ll be on the keyboard at the drop of a hat. Or a wine glass, more likely.

Apart from the occasional new post, over the next couple of weeks (while we’re all busy, no doubt) I’ll be re-posting articles from the archives that have content that is still as pertinent today as when they were written. This post is the first of these, based on We are what we read from September 2011. It was a dig at Australians for the easy way they fall into a hypnotic trance from the rubbish they read in our mainstream media. They believe every word. If, somewhere on the front page, they were asked to act like monkeys then they’d surely be dragging their knuckles all day.

Not much of anything has changed from the original post. Julia Gillard is still bad and Tony Abbott is still good. The papers say it, so it must be true. Or so an idiot would believe.

Anyway, here’s a slightly edited version of the original post.

I am always chuffed at the number of comments I receive while overseas that compliment the economic stability of Australia.  Here is a sample:

Not one of these people have visited Australia.  They only know about us from what they read in the media.

Oh how refreshing it was to be confronted by this media inspired positive portrayal.  And it was all true.  Our dollar is strong, as is our economy and economic rating.  We did avoid a recession and the Western world acknowledges this and is envious of it, and we do always have strong leaders.  Everywhere I went, people were giving Australia a deserved pat on the back.

But not so the Australians I met overseas.  At every opportunity they were condemning our lucky and prosperous country.  When exposed to their rants it was apparent that all their political knowledge and opinions were formed from what they read or heard in the Australian media.

Before I am attacked with the suggestion that I’m blaming the media for this or that or whatever – I am not – I am only suggesting that people believe what the media tells them.

The fellow Australians knew that Julia Gillard encourages refugee boats, that the Carbon Tax was going to ruin everyone in Australia with an annual income under $150,000, that the mining industry was at the crossroads because of the resource tax, that new taxes will be introduced on a monthly basis, that the GST will increase and worst of all, we will inevitably be a Muslim country and Julia Gillard’s contribution to this inevitable outcome cannot be ignored.  They knew all this of course, because they read it in the papers.

These very same people had Tony Abbott ‘nodding head moments’ when I mentioned that there will be a carbon price no matter who is in power, or that to fund Abbott’s maternity leave plan the mining industry would be hit even harder than they would be with the resource tax, or that Abbott’s present carbon reduction policy would hurt the family budget more than Gillard’s, or that the number of boat people entering Australia is a drop in the ocean (excuse the pun) when compared to the number of plane arrivals.  I was puzzled, in particular, that nobody knew anything about Tony Abbott.  Then it hit me: apart from his negativity, nothing about the man or his policies are published in our media.

The average person in the street can only rely on what the media tells them.  It was the same overseas.  If the overseas papers were filled with negativity about Australia then I’m sure I would have heard about it.  Instead, all I heard was praise, for that is what is being published around the world: praise for Australia.

We are what we read.  We will believe what the papers tell us.  One lot of papers is saying that Australia is economically and politically strong while another lot are telling us the country is in a mess and is poorly governed.  The latter are also telling us everything they want us to know about Julia Gillard but nothing about Tony Abbott.  It is comical that those vociferous in their condemnation of Julia Gillard have not a skerrick of knowledge about Tony Abbott.  It is also comical that those vociferous in their criticism of this great country have no idea how economically strong we really are.  It’s a pity that if you want to find out how strong and healthy this country is . . . then you’ll have to find out by reading an American or European newspaper. 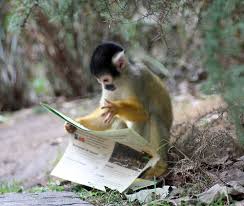 52 comments on “Nothing’s changed: we still believe what we read in the papers”