“Sorry” seems to be the word of the moment. Everybody’s calling on someone somewhere to offer an apology to contrived victims of verbal vitriol. Some of these are obviously warranted, such as the recent call for Alan Jones to apologise to Julia Gillard for his much publicised ‘dead dad’ remark.

And we learn today that the same Mr Jones has been ordered by the courts to apologise for his racist rants against Lebanese Muslims.

I hope his apology – when forthcoming – is more inspiring and convincing than his token apology to Julia Gillard.

With “sorry” being the favourite word in the media we now see people lining up for an apology.

Campbell Newman has demanded Labor apologise to all Queenslanders in the wake of broadcaster Alan Jones saying sorry to Prime Minister Julia Gillard about comments he made about her dead father.

Mr Newman on Monday said Mr Jones “had the guts” to apologise to Ms Gillard for suggesting her father died in shame and he would be happy to appear on his program.

However, Mr Newman said unlike Mr Jones, Labor were yet to say sorry for the series of accusations they levelled at him during the March election.

The Opposition want one:

The opposition has demanded Foreign Minister Bob Carr apologise for attacks on Julia Gillard by his associate Bob Ellis over her response to her father’s death, accusing Labor of double standards over the Alan Jones affair.

Ellis, a speechwriter to Labor figures including Senator Carr, accused the Prime Minister of “girly tears” and taking “time off playing hookey from her national obligations” on his Table Talk blog last month. “Julia Gillard’s oft-boasted ‘steely resolve’ has been tested lately, and she has failed to show it every time,” Ellis wrote.

Earlier, speaking from New York, foreign minister Bob Carr said Jones’ remarks were deplorable and should be denounced by the Opposition Leader.

“I’ve heard some indecent things in politics but never something as thoroughly indecent as this,” Senator Carr told Network Ten’s Meet The Press program.

“Tony Abbott ought to do the decent thing and say today loud and clear that he apologises to Julia Gillard for unacceptable remarks, made at a Liberal party gathering attended by frontbench liberals.

“The doctrine of ‘Gillard Exceptionalism’ should now be abandoned. She should either do the job, or get out of it.”

Catherine Deveny won’t be giving one:

I’m sorry, but I won’t be writing an apology letter to Bindi, Rove or the Anzacs.

Or to people who spend long hours working jobs they hate to send their children to private schools to feel good about themselves.

I won’t be writing a letter of apology to women who change their surnames when they marry, or to people who drive four-wheel drives, or to fans of McLeod’s Daughters, The Footy Show or Two and a Half Men, or to people who listen to 3AW, to readers of the Herald Sun or people who shop at Chadstone.

And I won’t be writing a letter to The Age for supposedly offending people with bad-taste remarks, inappropriate language and being me.

It’s also catching on in America and now Mitt Romney wants one:

Mitt Romney disputed reports that he worked for Bain Capital longer than he had publicly suggested, insisting Friday he had no role “whatsoever” in managing the company after February 1999 when he left to run the Winter Olympics. Public filings from the company suggest otherwise.

In consecutive interviews with all five television news networks, Romney accused President Barack Obama and his campaign of attacking him on his record at Bain Capital in order to “deflect attention” from Obama’s “failed” economic record. And he called on Obama to apologize for the false attacks.

And of course, he owes one himself:

My dad would have said “small people have to make other people feel small so they can feel big and important. We should pray for them.”

In keeping with the media’s obsession with apologies and who should be making them, I thought we’d introduce the theme to the blogosphere. Namely, who would you like to see make an apology?

Yes, you can have some fun with this.

I have one to kick it off: I’d like to hear Tony Abbott apologise for frightening most of us half to death during his fraudulent ‘carbon tax’ scare campaign. Not a half-baked Jones’ style apology, but one from the bottom of his heart. 😯 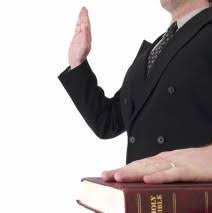