The article by Ms. Peatling summarises some of the ways in which our Prime Minister is treated differently; because she is a woman. This attitude I believe, originates with Tony Abbott’s original statement that Julia Gillard, Prime Minister would deliberately use her gender as a woman to some sort of advantage. The opposite has been so.

Did Tony expect Ms. Gillard to lift up her petticoats and squeal when challenged?

As events came about, it ended up being Tony himself with the petticoats and squealing.

It is not necessarily overt references to the inferiority of Ms. Gillard’s gender, but rather it is subtle put-downs. Sarcasm, which is a put down is often used as a tool in order further lower the status of any female (or indeed any person), who might dare to complain.

Stephanie Peatling calls attention to this in her article:

I’m pretty sure enduring cartoons making fun of the size of your bottom, remarks about your marital status and smutty innuendoes about ”getting into bed” with people constitute sexual harassment in the workplace.

Unless your workplace is politics.

At one stage I lost count of the number of times which Tony Abbott addressed Ms. Gillard, and managed to insert the phrase, “getting into bed with”. There is also our Café Whisper’s “favourite”, that Tony Abbott appears to choke on the words Prime Minister Gillard, or even Ms. Gillard – to Mr. Abbott, she is The She. 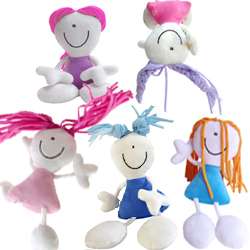 I fully appreciate that this might be difficult for a person of the non-female gender to completely understand. For a majority of women it has been a life long event, from the time one was told that girls aren’t welcome.

Although many women have been accused of being “precious” about girlie calendars and risqué jokes, women know for a certainty that these calendars and jokes would not be presented in the same put-down manner to one’s sister or daughters.

Then there is the backlash, would it be worth the effort to complain when the attitude is likely to be that the female is accused of being: 1. too precious, 2. cannot take a joke, 3. trying to cause trouble and 4. is likely to be ostracised and/or subjected to even worse treatment.

It’s all about undermining the person, and the attempt to take away their credibility.

For this reason alone, this tactic is being used by Abbott’s Liberals.

In attempting to discern whether the treatment of Ms. Gillard is sexist in its intent, I pose a question: Can a politician, either male or female use sexist comments against another man? The clear answer is No, he or she cannot. Could for example, Julie Bishop call X politician a gay, cross-dressing tart? J. Bishop may indeed like to, but of course such sexist comments are taboo; unless that is, your intended victim is a woman.

Stephanie Peatling concludes her article with:

Is this the start of Ms Gillard calling out sexist behaviour? I doubt it. She can’t, and won’t, play the victim. But it was good to see her do it just for once.

Sexism has been a powerful political tactic, it’s intent being to undermine. Let’s hope for future female politicians that their policies will come under more scrutiny than their hair, dress sense and the size of their derrière. Nor that male politicians will think it all fair game to use a woman’s gender as method of attack.

I would now ask Tony Abbott to explain his original statement that there is a political advantage in being a woman.

Forget leadership spills. Tony Abbott’s adventure last night into unknown waters has been greeted with applaud from a conga line of suckholes collectively called the Opposition.

This is the story that has had the social media in a storm of tantalising frenzy:

Opposition Leader Tony Abbott has denied saying he did not read a BHP statement on company’s decision on the Olympic Dam mine before blaming the Government’s carbon tax for the delay.

Mr Abbott has said the government’s mining and carbon taxes are partly to blame for the company’s decision.

BHP had been warning the two taxes were making Australia a less competitive place to invest, he said.

Whilst I thought that his poor captaincy on display last night must surely be questioned I’ll be quick to declare that I was apparently wrong. Well, according to his mates who sit on their rightful side of Parliament I was wrong. Tony’s still their man and they’re throwing bucket loads of bullshit in defense of him. Venture below to hear what they said.

. . . it’s “ridiculous” to suggest the carbon and mining taxes played no part in the decision to scrap the project.

“The question today is how could you possibly argue that a new tax that will be paid by the company is not an issue in the decision they make?” Senator Joyce said.

“Do we think for one second that this (carbon and mining taxes) wasn’t an issue that was discussed around board tables at BHP and every other resource company in the world?

“Expenses such as these become part and parcel of the decisions you make.”

BHP’s decision was the biggest blow to business confidence in SA since the state bank disaster of the 1990s.

“This is a blow that potentially could have been avoided,” he said, adding that government policies certainly did not help.

They definitely had hurt the prospects of the project going ahead, Senator Birmingham said.

“They will be paying enormous additional taxes, funds they could have been investing in the Olympic Dam project,” he said.

“The reality is that he (Mr Abbott) was already aware that the cost of removing the overburden in Olympic Dam is more than $50 million as a result of the carbon tax,” Mr Macfarlane said.

“Yesterday’s decision is further proof that this government is driving investors away from the resource sector in Australia.”

Also jumping to Abbott’s defense was Liberal MP Rowan Ramsey who enlightened us by announcing that:

BHP was choosing its words carefully when explaining why the project was cancelled.

“While they didn’t expressly say it was the tax, they said it was the cost of doing business in Australia,” he said.

There you have it. Tony Abbott presented himself well and the blame should be laid at the feet of BHP who clearly talk with forked tongues.

So Tony is safe, which makes Julia even safer. 😉

Only yesterday I asked if Tony Abbott would eventually have the blowtorch applied to him. I didn’t have to wait long thanks to Leigh Sales on the 7:30 Report last night. She applied it and Abbott discovered that it burns. It was demonstrably too hot for him to handle. He looked and performed like an absolute dill.

We’ve all had our laughs from it but now it’s time for more serious questions. I’m wondering if the party is ready to ask them.

Here are some important ones they could consider:

Is it? What do you think?