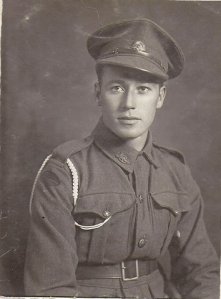 Tomorrow is ANZAC Day. This day is probably the only truly unique national day for Australia.

I recall being a somewhat cynical teenager in the ’70s watching our Vietnam soldiers parade thinking that they had fought for a lost war, yet something said to me that the valour was to be honoured. I think that there is something very special about the Australian way of thinking, that we honour defeat even more than we honour victory. The thought of killing more of our enemy than they have killed us does not bring with it pride, not for we Australians.

It is perhaps having persisted in a harsh environment that we consider all life to be honoured, not to be wasted.

On this day I also give honour to our original Australians who fought, the Aboriginal volunteers who fought in all wars from the Boer War onward. Historian David Huggonson, spent 20 years researching the Aboriginal contribution to Australia’s military campaigns and discovered the names of 428 Aboriginal soldiers who served in WWI. This is from a population of 80,000 persons.

There is another way which I believe that we Australians are different; that is with a certain scepticism, we do not believe in the rallying cries but rather join in the fight when we believe that there is a job to be done. We are foremost practical nation of people.

I will use this as an opportunity to tell you about my father. Dad was a factory hand who had no schooling after age 12, he lost a finger in an industrial accident when he was 18yrs old. Dad didn’t believe in war as being a solution to any problem, plus being a passionate nationalist Dad did not believe that we should be fighting England’s wars. However my father then found himself a conscript, and was sent to Milne Bay. According to my father his entire time was spent on midnight raids to the US forces camp so that they could steal coffee and chocolate. The US forces were well rationed.

I very much doubt that this was all that Milne Bay entailed, but that was the way that my father liked to describe it.

My father was repat’d out of Milne Bay with acute malaria and spent another 6 months in a psych ward. I have his medals with my name roughly scribbled on the box. I took them for show and tell when I was 4 years old.

I read an article which said:

Prime Minister John Howard was using the same technique the same day at Gallipoli, telling the crowds that the “valour and the sacrifice” of the ANZACs lived on in the Iraq deployment. By using the language of government rhetoric in the context of a commemorative speech, both men attempted to render current government goals indistinguishable from the goals of Australia’s war dead. If the dead are sacred, and their goals are likewise, then a government professing to have the same goals can shelter behind that sanctity, laying claim to it for their own ends.

Stereotypes of Australian servicemen are used to construct concepts like ‘Anzac spirit’, which are also open to political exploitation. The mythological digger is a brave tough idealist, a laid-back larrikin and an all-round good guy. His image is co-opted to define what is truly Australian, and what is the converse.

To tell you truth, I do not give a damn. Today is the day that I think of my father and his sacrifice. I can see my father in my mind’s eye, neither glorifying the ANZAC sacrifice nor being cynical that this did entail sacrifice. One can intellectualise, but I cannot walk in the shoes of the ANZACs. I would not presume to know the thoughts which they thought.

Therefore, here’s to our ANZACs.

It was clear well before the weekend began that the Formula 1 event held in Bahrain on the weekend, was going to be no ordinary race meet.

I should start out by saying that I am a Formula 1 junkie, a hopeless one….

However this weekend was different, and I have to say that I watched the qualifying, and the race with a sense of guilt.

I am no expert on the goings on in Bahrain, so I won’t pretend to know even half of the troubled countries woes. What I do know however, is that the Formula 1 event due to be held in Bahrain last year was cancelled, for the same reasons this years event had question marks over it.

It is not the safety of the drivers I have concern with, these guys risk their lives every time they squeeze into the cockpit, I think their veins are full of adrenalin rather than blood. Also with the amount of money involved I am quite sure the teams can hire a militia as a security detail.

My question is what message does holding the event at all send, and what is the reason for a different message to last year?