The findings are not only an analysis of 41,5784 valid completions of this census but in conjunction with this, the ACTU posed questions to a representative sample of 1,000 Australians using an online public poll. This public poll was intended to be a benchmark so as to provide a point of comparison with the census results.

It will come as no surprise that the results of this Census reveal that Australia is lagging behind the developed world when it comes to job security with approximately 40%of our workforce employed as either casual and contract. This means that almost 25% of all employees which total more than 2 million people are employed on a casual basis.

However the new news is that rather than as one would expect, that those in insecure employment are not low skilled and poorly educated but rather are university educated. It therefore could be argued that the new ‘flexibility’ in the workforce has gone all the way of the employer and has disproportionately effected those higher up the ranks of the educated. There has been some puzzlement as to why Australians, so wealthy and faring the GFC so well feel so hard done by..perhaps here is one reason.

Which brings us to where Tony Abbott’s attitude lies. Certainly at the start of the previous election campaign Abbott famously declared that WorkChoices is “dead, buried and cremated”. Although it is on Hansard as follows:

“There was a further round of workplace relations reform, which was a political mistake, but let us be under no illusions: it was economically advantageous.” **

However, to date Abbott has successfully avoided taking a stance via avoiding making any worthwhile policy statements, at least none that hold up under any form of reasonable scrutiny – but will he finally be forced to? And will the polls then start to say something different once it is realized that the Tony Abbott of 2009 is the Tony Abbott of 2011/12. 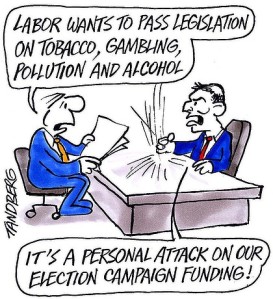