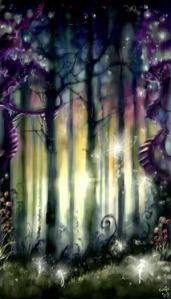 Well, hasn’t it been a full on week in politics and as I mentioned elsewhere: Why do I have an uncontrollable urge to say the words Shut Up You Idiot whenever Tony Abbott appears on TV.

Anyway this one is just for fun..it’s called The Thing that Walked Tiptoe and it’s an elf tale.

It’s also for all those people who are just a little bit different and who don’t always walk with their toes touching the ground.

Once upon a time there was a little thing that walked on tiptoe. I don’t quite know what it was, but I can tell you how it came to walk on tiptoe.

You see, it loved humans and it was always saying, “Why can’t I be human? If I always kept my ears covered, couldn’t I be human then?” For its ears and the ears of it’s mother and all their friends and relations were high and pointed and stood up on each side of their heads.

But its mother said “No little thing, for humans always walk with their feet touching the ground, so they would know at once that you weren’t human.” Little Thing and its mother and their friends and relations couldn’t touch their feet to the ground, but walked on air, and the nearest they could get to it was just about three inches above it.

Little Thing sat with a book and looked at the pictures of all the humans standing on the ground, and it felt so envious as it looked down at the earth, three inches below its feet. Presently it stretched its toes down as far as they would go; but though it got nearer to the ground it couldn’t touch it.

The Little Thing put its book down, and set its teeth, and it jumped and practiced standing on its toes; until at last – what do you think? – it just managed to touch the earth with its toes. “Look at me walking on the earth like a human!” And it actually walked a few steps, on its toes like a dancer.

“Well,” said the Little Thing, looking at the book “Now I must have a human hat to cover my ears.”

So it made it a straw hat and put a wreath of flowers around it. “Now,” said Little Thing, shutting the book, “I must find some humans to play with.” And so it said goodbye and went out into the world, walking carefully and proudly on its tiptoes and keeping its hat firmly pulled down over its ears.

Presently it came to a town and all that day Little Thing felt exactly like a human being.

Presently, as the sun began to go down, a little girl said, “I like you. You’re nice to play with. The other children are rough. I don’t like playing with them.” And the Little Thing said “I don’t play with them because they won’t let me, but why do you like playing with me?” And the little girl said, “Because I like you, but you aren’t a real child, are you? You’re only just pretend.”

23 comments on “The Thing that walked on tiptoe”